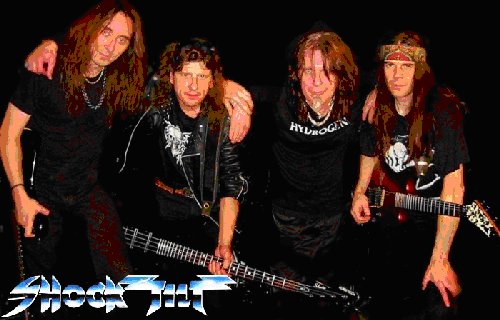 Shock Tilt's debut Mini-LP "Night Fight" (1985) is probably one of the most rare heavy metal records ever produced in Sweden. Their perfect mixture of hard rock and heavy metal was probably a dream for every young label back then, but one tragic event stopped band's career, and nothing was the same again. I was quite surprised after hearing about comeback of this fantastic band, so I decided to get in touch with the guys to ask them few questions. Ladies and gentelemen: Jonny Mellis, Shock Tilt!

- Hello Jonny, how are you doing?

- Cool! Ready for a small talk?

- Ok. Let's start from the beginning... Your first LP "Night Fight" was out in 1985. For how long did you work on material for it?

It took about three months from scratch to vinyl.

- And when was Shock Tilt actually formed?

- If I'm not wrong, you weren't one of the founding members?

- How do you remember first days in the band, and how did you join Shock Tilt?

I recall that there was a party at the bands "rehearsal-studio" and a friend of mine took me there. There was a lot of jamming and remember I had a good time, it was fun to play with musicians with the same taste of music. A few days later Rolf Hðggblom, the bass player called me and asked me if I wanted to join the band.

- Did Shock Tilt record any demo tapes before the "Night Fight"?

They sure did, Rolf gave me a cassette with more than 10 songs to learn.

- Why did the band start with a 6-track mini album, instead of doing a full length release?

- The debut LP was published on band's own label Tilt Records. How many copies were pressed?

- I would say that "Night Fight" was a perfect mixture of classic metal and hard rock, highly influenced by bands such as  Judas Priest or Black Sabbath... Were there no labels interested in having a deal with the band? 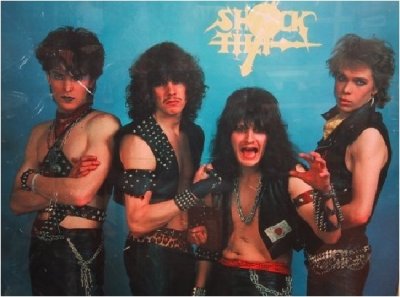 CBS were interested and a German label called Jax-Pax, but some misunderstandings about the distribution halted the process.

- How often did Shock Tilt play live concerts back then?

A couple or three gigs per month.

I remember Shock Tilt appeared as a warm-up act for Mot—rhead at "Fryshuset" in Stockholm.

- Why did it take 4 years to record 2nd album "Heaven Calls"? Was the band active during these years?

The band was not active for almost a year after the incident 1987 with the guitarist...

- ... so how would you compare them as a listener, and as a band member that have to play old classics?

Being a fan of hard rock and heavy metal, I of course liked (and still like) the music so playing the classics is no problem.

- I heard some terrible stories about death of Hannu, your first guitarist... What actually happened?

It was late evening on Thursday the 26 November 1987. Hannu took the bus from his job at the L—wenstromska hospital in Upplands Vðsby and was in a hurry. The was beginning to get dark when he arrived at Viks gard, where heavy metal band Shock Tilt was hiring a rehearsal local. Their new manager had brought a recording from their latest gig - at "Fryshuset" in Stockholm Where Shock Tilt had played as warm up act for English hard rock band "Mot—rhead". The manager knew the business well indeed, he had perfect contacts. Now he had plans for a meeting with a German record company; Modern Music NOISE International in Berlin. - Shock Tilt will be known all over Europe, had the manager said. He will travel to Berlin to make PR for the band was the plan. This was big. Therefore Hannu was in a hurry. They were supposed to rehearse before the meeting with the manager. Hannu should accompany as a member of the band. He is the youngest and has best rock star image the manager said aloud, at the studio in Viks Gard, Upplands Vðsby when Hannu arrived. A white Mazda Stood parked outside. The manager had rented that and promised to pay all expenses for the PR - trip to Berlin. The band had seen an advertisement in a paper called "Gula Tidningen" where the manager searched for heavy metal bands for gigs and recording. Shock Tilt answered the ad and after a few calls they got confidence for the Swedish manager. - We must leave at once said the manager. Hannu Quickly packed a bag. In the cabinet he left his guitar, his "precious"... What is this guy's first name? Hannu asked and went out the door. These were the last words his friends in the band would ever hear him say... - The manager's name was Anders Carlsson. The time was 19.30 when the car left the Shock tilt studio. Mere days after Carlson and Hannu, "left Sweden" for Germany, the Swedish newspapers are filled with reports of a dismembered, unidentified corpse found in central Sweden. For sixty-one days Anders Carlsson claimed that Hannu Rajala had been riding in his car going south, and then disappeared without a trace soon after arriving at Copenhagen, Denmark...

Dec.10 Rolf Hðggblom, bass player in Shock Tilt got a letter from the manager:

"Hi Rolf! I will not come home until I find Hannu, or at least get some sign of life from him. It's impossible to celebrate Christmas unless this situation gets some kind of solution, so I will stay here and keep looking. I have begun search for Hannu in Christiania, but with no luck. I get more worried for him for every day that passes."

Hannu Rajala died November 27th. It was the morning after he and the manager left for Berlin. They only got as far as to "Vðllingby" a couple of miles from Upplands Vðsby. That is where Hannu Rajala was put to sleep with ether in Anders Carlssons apartment.

January 27th the dismembered body was identified. Only an hour later Anders Carlsson gets arrested for murder in his car in Link—ping. There was a direct connection between Hannu Rajala and manager Anders Carlsson. Modern technique enabled the police to secure evidence in Anders Carlssons apartment; How the dead body was cut, molested and humiliated. Carlsson had cleaned the apartment throughout after the murder. He applies strong detergents on floors and walls, in bathroom and points.... He has used all tricks known for that sweep away signs. But he forgot one place. Under the threshold to the lavatory, there was the final proof and argument. - Hannu Rajalas blood.

- Fuck...!!! Allright. I know Shock Tilt is now active again. Not that long ago you appeared on the Ozzy tribute album for example. What are the nearest plans of Shock Tilt? I heard something about a movie...?

Yes, Hakalax Productions (Finland) is working on a documentary about Hannus death that will be released this autumn titled: "The real monster of rock" (There is a link at the end of the interview). We are working on an album, probably with the same title as the movie which will be released simultaneously. This album will be harder and more "metal" than the previous releases, a mix of classic hard rock and modern metal If you liked the early stuff, you will not be disappointed as this album will be like an updated version of "shock 'n' roll"

- Are you planning to release your classic albums perhaps? They're extremely rare nowadays!!!

Yes we are. We have discussed releasing a re-mastered version of "Night Fight" with the songs from the single "Heaven calls" as bonus tracks. They are rare indeed We've seen it on sale on the net for 150 euros!

- Did you know that "Night Fight" has been released on a low quality CD bootleg?

I've heard some rumours, but wasn't sure until now.

- Allright, I guess that's all I wanted to ask for! Thank you for your time! Last words are yours, keep on rocking'!

Thank you Bart! If we are coming to Poland to play, you'll be the first to know. As soon as the new album is finished I will send you a copy to review. Long live Hard Rock and Metal Shock 'N' Roll!!!